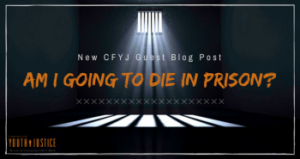 “Am I going to die in prison?”  I was arrested and charged with committing my offenses at the age of 16. I was transferred into the adult criminal justice system at the age of 17.  I had none of the assistance available to youth serving their sentence in a youth facility, where young people were offered rehabilitation and vocational training.  There were no therapeutic or vocational programs in New Jersey State Prison, where I served the first 11 years of my sentence.

The enactment of the Violent Crime Control and Law Enforcement Act signed into law by former President Bill Clinton in 1994 banned federal financial aid, like the Pell Grant, for Higher Education programs within state and federal prisons.  Therefore, post secondary education courses were no longer an option for me, and my education stopped after I acquired my G.E.D. in 1998, almost 20 years ago. To date, I have been in administrative segregation (solitary confinement) over 10 times.  I have struggled to learn social and civic responsibility without any meaningful assistance.

Since my incarceration, New Jersey raised the minimum age that a youth may be transferred to adult court,  former Governor Christie signed a law banning life sentences without parole for juveniles in 2017, and the New Jersey Supreme court ruled in State v Zuber (2016) that courts could not sentence juveniles to a term defined as the “practical equivalent of life without parole.”  There are many currently incarcerated, like me, who received their sentences prior to these changes, who are not afforded their benefit, which begs the question: “Am I going to die in prison?”

I am not familiar with an excess of cases where offenders serving life with 30 years parole eligibility, who have been to a parole hearing where he or she was granted release.  However, the few that I am aware of who were tried as adults as juveniles and had parole hearings, have not only been denied parole, they have received an F.E.T. of 120 months (10 years) or more.  There is neurological and developmental science and research that tells us youth are different than adults. There is a growing national consensus to change how youth are treated in the adult criminal justice system.  Yet, these advances are not recognized by New Jersey’s Department of Corrections and some in our judiciary, particularly when it comes to the treatment of youth tried as adults before these reforms. I ask that reformers and advocates for youth locked in prisons don’t forget to advocate for those of us who have been in adult prison for decades and who have to ask ourselves everyday, “Am I going to die in prison?”